The spillover of the Ethiopian conflict

Government forces have been engaged in conflict with the Tigray People's Liberation Front (TPLF) across the regions of Tigray, Amhara and near the Eritrean border since 3 November. Tens of thousands of displaced people fleeing the fighting swamp the Sudanese border, triggering fears of a massive health and refugee crisis as Ethiopia’s internal community relationships fracture, increasing likelihood of sustained and more widespread conflict. 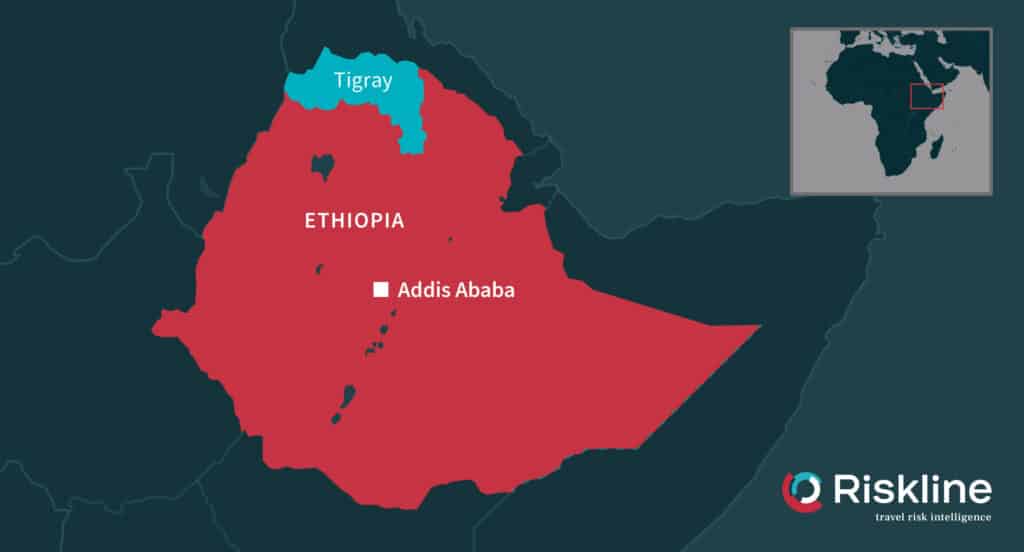 Since 3 November, Ethiopia, the most populous country in the Horn of Africa region, has seen ongoing conflict resulting in hundreds of casualties as Ethiopian National Defense Forces (ENDF) clash with Tigray People’s Liberation Front (TPLF) across the northernmost Tigray region. The conflict has also spilled over the region’s northern border, into Eritrea, whose military, siding with ENDF, harbours simmering resentment against the TPLF following a lengthy conflict which saw 100,000 killed between 1998 and 2000 as Eritrea fought to define its border with Tigray. Since the beginning of the current conflict, some 30,000 refugees have fled over the Sudanese border, triggering the deployment of Sudanese troops at border crossings and concerns of a burgeoning COVID-19 crisis in the camps.

August saw incumbent Prime Minister Abiy Ahmed postpone nationwide elections, by at least 9 months due to the COVID-19 crisis. This move was perceived by the TPLF as a power grab, an attempt to unconstitutionally extend Ahmed’s leadership. In response, Tigray held its own state-wide election, as well as reportedly launching an attack against ENDF stationed in Tigray. Since then, both sides have shelled and engaged in ground combat as ENDF has advanced to the southernmost major city of Alamata, Tigray, and continues an offensive along both west and east borders, to claim Humera in the west and Mekelle in the east. Power, phone and internet was cut to the region from 5 November and remains unreliable.

Both sides, TPLF and ENDF, are battle hardened due to past border clashes with Somali rebels to the south (ENDF) and border tensions with Eritrea in the north (TPLF). Prior to clashes in Tigray, the ENDF was reported to have some 140,000 personnel, some 15,000 of whom were deployed in Tigray. These ENDF personnel in Tigray, have split into three groups: roughly one quarter are ethnic Amhara Ahmed loyalists and have fled to Eritrea, the second group remain under guard in TPLF barracks across Tigray and the remainder joined the TPLF. Additionally, many ENDF commanders were Tigrayan and have returned to their region, to fight alongside the TPLF. In a third blow to the ENDF, much of its major military infrastructure and weaponry is stored in Tigray, a remnant of the Eritrea-Ethiopia war of 1998-2000 and is now impossible to access. Finally, TPLF dwarfs ENDF in terms of personnel, boasting a 250,000 strong military force, before its additional ENDF addendum.

Relations between the Eritrean state and the TPLF have been strained for an extended period of time following the Ethiopia-Eritrea war, positioning the TPLF as a common enemy. Amidst such a historical context we can see that tensions are heated and indeed have resulted in the conflict spilling over the border with Eritrea, with the shelling of Eritrean capital, Asmara’s airport, by TPLF forces on 15 November. ENDF forces began heavy shelling across Mekelle from 17 November, advancing on the state capital, as civilian and military casualties continue to mount. Ahmed’s government has refused to engage in discussions with the TPLF, ruling out any diplomatic resolution to the conflict.

The longer armed hostilities between ENDF and TPLF forces continue the more likely conflict will spread into other Ethiopian regions where tensions are already high; Benishangul-Gumuz region is already affected by deadly inter-communal violence targeting ethnic Amhara since September. Instability is also likely to extend into the southern region of Oromia, on the Somali border, where there is already strong anti-government sentiments. Nationwide stability is seriously compromised by the current conflict and Ethiopia’s equally unstable neighbouring countries of Sudan, Somalia and Eritrea are unlikely to remain unaffected by it.