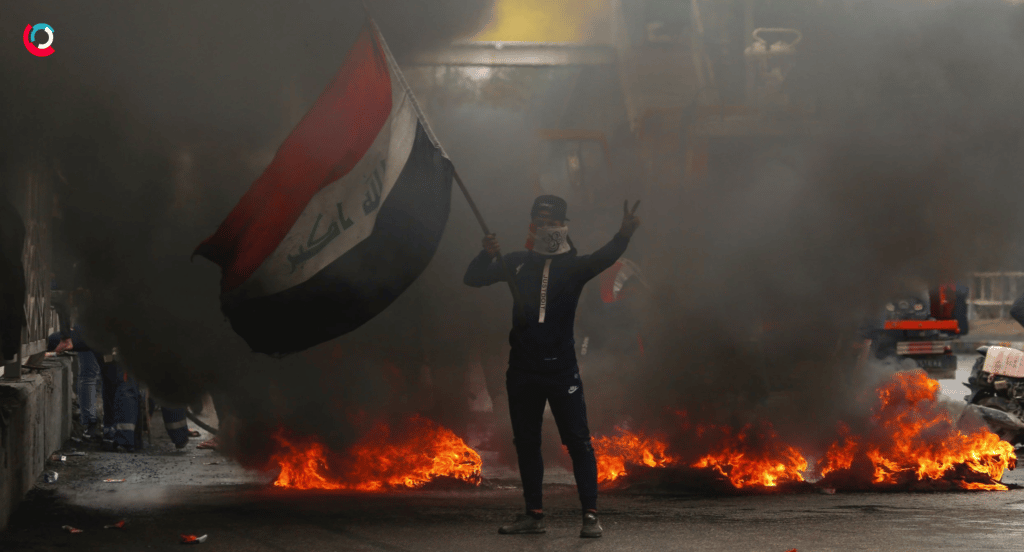 Since October 2021, inconclusive elections left Sadr’s bloc the largest in parliament but just short of a parliamentary majority, and therefore unable to form a government without the support of other blocs. As October approaches, Iraq reaches one year of parliamentary deadlock under a caretaker government.

Multiple national dialogue talks were called, boycotted, recalled and boycotted again as the parliamentary blocs continued to bluff and stymie each other in negotiations. While parliamentary stagnation reigns, all state institutions remain paralysed, leaving Iraqis suffering at the hands of their politicians as the provision of water, power and other basic services are neglected.

As temperatures hit stifling heights over the summer months and anger grew amongst the population, tensions were bound to boil over. As the summer progressed, Sadr mobilised his supporters, numbering in the hundreds of thousands, across Baghdad and Sadrist strongholds such as Nasiriyah, Najaf and Basra to lend weight and pressure to Sadr’s statements; a growing threat of destabilisation became apparent.

Sadr withdrew his bloc’s lawmakers from Parliament with an accompanying demand for snap elections to be held to remedy the ongoing deadlock. The withdrawal left the Coordination Framework, the pro-Iran Shia opposition bloc to Sadr, with a majority of seats.

The Coordination Framework, in opposition to Sadr’s stance, remains unwilling to call elections before a new head of government is appointed. As Iraq’s constitution requires a Shia prime minister, leadership therefore sits between the Sadrists and the Coordination Framework who respectively held and hold the strongest position in Parliament.

Sadr called his supporters to hold sit-ins outside Iraqi parliament throughout July to prevent government formation under the Coordination Framework. This ploy was successful and stalemate continued. On 29 August, Sadr, in a bid to turn up the heat on the remaining blocs and direct them toward calling snap elections, announced his withdrawal from politics. Within hours Sadr’s supporters filled the Green Zone and stormed government buildings.

As the day progressed, Sadr’s supporters continued to amass in the area and as night fell members of the Saraya al-Salam, a militia aligned with Sadr, arrived in the zone to provide armed support to Sadr’s supporters. Saraya al-Salam forces clashed with Popular Mobilisation forces, associated with the Coordination Framework, while Iraqi military units were also deployed. The resulting violence led to hundreds of casualties, evacuations of embassies, a nationwide curfew and suspension of flights with Iran and UAE.

As morning came, Sadr called his supporters to stand down and relative calm returned to the Green Zone. However, caretaker Prime Minister Mustafa al Kadhimi threatened his own withdrawal from Parliament should violence continue. Further violence has not been reported since 29 August as early September coincides with the Arbaeen Shia pilgrimage which has provided a natural cooperation background for Shia on either side of the Sadr-Coordination Framework divide.

Iraq’s political environment remains tenuous, the social and security environment remains equally tenuous. Eruptions of violence to the scale witnessed on 29 August cannot be discounted in the near future, especially in the case of the resignation of Prime Minister Kadhimi or the formation of government without Sadr bloc representation. A new round of protests centred on the Green Zone by Sadrists, joined by the anti-corruption Tishreen Movement, are expected to begin from 1 October.