Our analyst on the ground in India describes her experience living through the current COVID-19 crisis in the country. 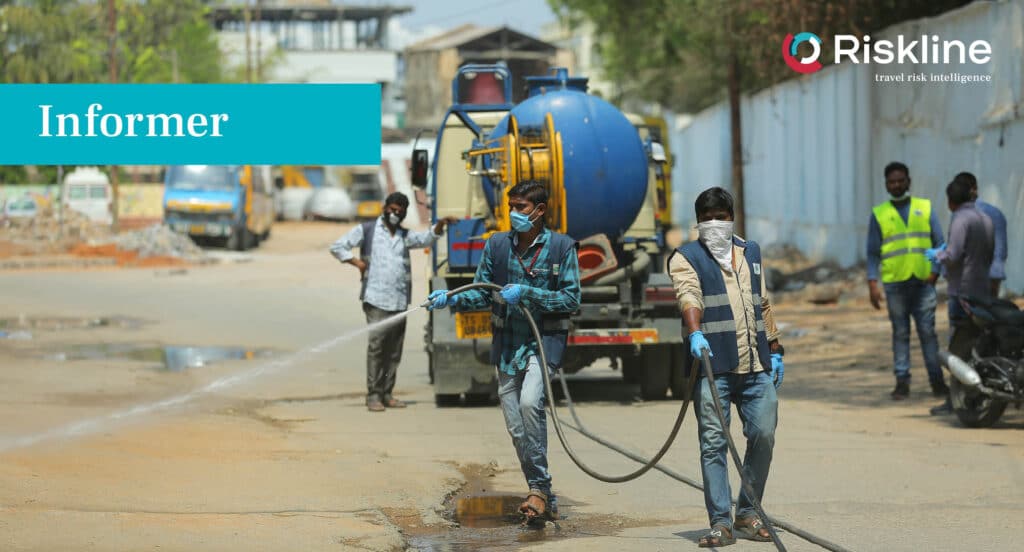 The streets wear a deserted look again in my hometown of Kolkata, the capital city of India’s West Bengal state, reminiscent of the same time last year when the country was battling the first wave of the COVID-19 outbreak. The only vehicles that drive past frequently along the main road in front of my house in northeastern Kolkata are ambulances and hearses, the former’s blaring sirens interrupting any semblance of normalcy one might try to muster. The restrictions in West Bengal, which took effect in stages only from 30 April owing to the state elections, were long overdue as the country struggled to contain the second wave from early April. A total lockdown which bans non-essential movement and allows only for the operation of grocery stores and other essential businesses during fixed, limited hours, and a 9 pm-5 am curfew remain in place here, similar to restrictions in most other regions of the country.

The drastic spike in COVID-19 cases in India can be attributed to several different factors. Government inaction and public complacency seem to be at the root of it. As the number of cases dropped between September 2020 and February 2021, government officials seemed to ignore warnings of a second wave from experts, including those at the Center for Cellular Molecular Biology in Hyderabad. The healthcare system moved back to focusing on other medical emergencies; in March, the health minister announced that India was in the “endgame” of the pandemic and the government started exporting resources like oxygen cylinders and vaccines to other countries en masse. A large-scale religious event in Uttarakhand state known as the ‘Kumbh Mela’ was given permission to go ahead from 1 April, attracting around 3.5 million devotees, which very obviously turned into a superspreader event. Overall human behaviour also contributed to the second outbreak; a year of pandemic-driven fatigue and frustration led people to resume their daily activities without taking much precautions.

Another major factor responsible for the rapid spread in some of the states and territories were state elections in March-April, particularly in Bengal where the elections were held in eight phases over a span of a month. Political leaders actively held mass campaign rallies in Kerala, Tamil Nadu, West Bengal, Puducherry and Assam as coronavirus prevention took a backfoot.

The increasingly resistant nature of the virus, with new and more infectious strains, also contributed to the spread of the disease. The second wave in India has been widely attributed to the B.1.1.7 variant, which was first identified in the United Kingdom, and the homegrown B.1.617 variant, which first originated in the worst-hit state of Maharashtra and now makes up an increasing proportion of cases in India.

The result of these factors combined is a devastating public health crisis that’s unprecedented in the recent history of the world. The ones directly affected are gasping for oxygen while their family members are leaving no stones unturned to arrange for hospital beds, remdesivirs, oxygen tanks and other resources. Those losing their family members to the pandemic are struggling to arrange for a respectable funeral as crematoriums are overflowing to the point where their parking lots are being used for cremations. Medical workers are overworked to the point of breakdown and social media feeds are flooded with SOS messages requesting leads on the availability of medications and hospital beds.

As the government struggles to respond to an overwhelming lack of resources, people are turning to strangers online for support; some are getting lucky while others are hitting dead-ends.The medical blackmarket is booming as victims’ families shell out thousands of rupees to avail basic necessities. News of friends and acquaintances passing away have become a regular affair in Indian households as the country continues to break its own records, registering the highest number of single-day fatalities of 4,187 in early May. Even as I write this, several of my friends’ relatives are fighting for their lives in hospitals, another has lost both parents and a friend in her early twenties has already succumbed to the virus. According to recent tallies, the states with the highest number of cases include Karnataka, Maharashtra, Kerala, Rajasthan and Tamil Nadu.

Recent reports indicate that the daily count of new cases has dropped in the country over the past week; however, repercussions from the second wave will continue over several months to come. Even though lockdown-type measures are being implemented, they are not sustainable in the longer run for a developing nation like India. A large portion of the population are daily wage earners and there is no safety net in place for these workers; needless to say, India’s economy is already reeling under the pressure of the crisis and will be unable to cope with the loss incurred from prolonged restrictive measures.

The government’s best bet at this point is to ramp up the rollout of vaccines and promptly address medical supplies shortage issues by investing in the public health infrastructure. Among other things, officials must also work to increase transparency and take accountability for their actions; critical data on vaccination supplies, reinfection, adverse effects, disease severity and transmission dynamics for example need to be made available in the public domain. Leaders must themselves practice caution first and lead by example instead of focusing on their political pursuits.