Black Lives Matter: One-year on from the murder of George Floyd

One year on from the tragic death of George Floyd, Black Lives Matter protests have taken place across the world, but despite some symbolic achievements, more government action is needed if institutional and meaningful change is to be realised. 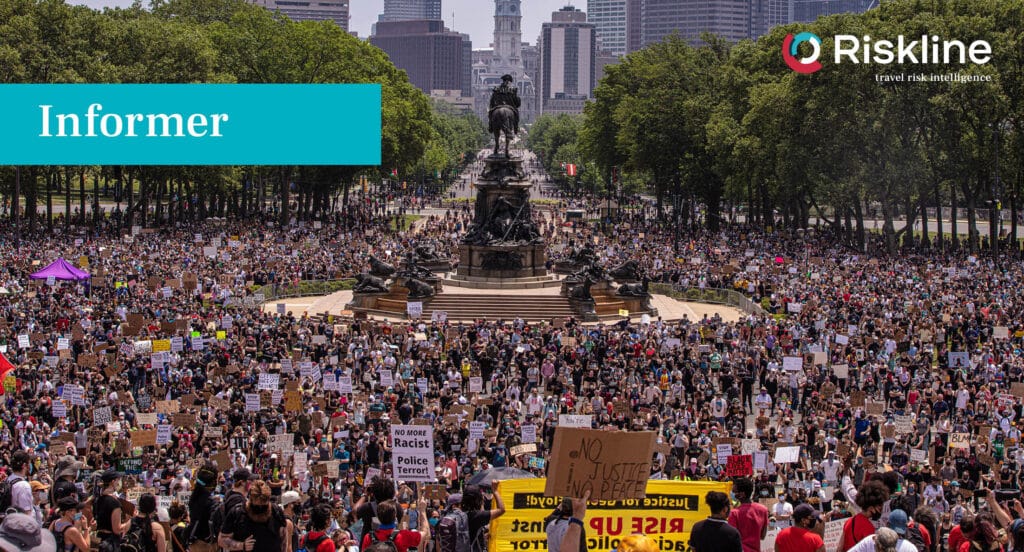 On 25 May, United States (US) embassies and consulates around the world hung Black Lives Matter (BLM) flags and banners to mark one year since George Floyd was tragically killed after police officer Derek Chauvin kneeled on his neck for over nine minutes. Floyd’s death sparked mass protests led by the BLM movement across the US and inspired solidarity demonstrations across the world, as people rose up to denounce racism and violence against Black people. The past year has emboldened a new generation of activists to carry on the fight, but despite some symbolic achievements, meaningful and institutional change will be a harder goal to accomplish.

Symbols representing the racist legacy of empire, slavery and colonisation increasingly became a focal point for the BLM movement over the past year, with numerous statues being defaced or torn down in the US, UK, Belgium, South Africa, Martinique, Brazil, Ireland, Portugal and the Netherlands, among other places. In the US alone, almost 170 statues, street names and other symbols of slavery and the confederacy have been removed or replaced in the past year, while in the UK, dozens of statues, streets and building names have been removed, replaced or altered. Such actions are symbolic and help to challenge the official narrative of history as well as initiate a conversation about racism. However, it is much easier to pull a statue down or to rename a street, than it is to implement criminal justice reform, divest from law enforcement or Israeli settler-colonial projects, pay reparations to former colonies or acknowledge that institutional racism does exist in Western countries. Symbolic acts need to be accompanied by actions from governments and corporations who have previously, or who continue to, profit from and uphold racist systems of power, in order to enact real change.

In a landmark case in the US, Derek Chauvin was charged with murder and manslaughter and, at the time of writing, is awaiting sentencing, marking a rare instance in which police officers are held accountable for the death of a Black person in custody. However, at least 229 Black people have been killed by police officers since the death of George Floyd, and most of these cases will not receive the same level of media attention or lead to similar convictions. President Joe Biden and the Democrats are attempting to pass the George Floyd Justice in Policing Act, which aims to reform policing practices and accountability, despite resistance from Republicans and law enforcement agencies. The legislation, if passed, will be a historic moment, but is only the first step in rectifying a system which disproportionately targets Black people. Political will and government action will continue to be required in the years ahead if the trial and sentencing of Derek Chauvin is to become a precedent and not a one-off.

Clearly, some positive steps have been taken to address racism and police violence during the past year, and the BLM movement has garnered support across the world, sparking a greater interest in anti-racism for many people. Much-needed conversations about racism, police violence and the legacy of colonialism have started to take place with greater attention and urgency. However, there is still a lot of denial and resistance to confronting these issues, including from governments. More protests will undoubtedly take place in the months and years ahead as emboldened activists continue to fight for equality and justice, but more policies and legislation such as the George Floyd Justice in Policing Act will be required if this is to translate into real change.